THE O’CONNELL VS D’ESTERRE DUEL by JIM BRASSIL: (Paper given to Naas Historical Society Nov 9 1995)

The exact location of the site of the duel between Daniel O’Connell and John D’Esterre is not irrefutable. Local tradition holds it took place in a group of trees slightly west of Uachtar Árd churchyard. There are strong local beliefs that it was marked by two boulders.

But there is no doubt but that the fatal and even tragic duel took place in this vicinity. O’Connell was then at his physical peak (aged 40) if not yet his political peak but well on his way. While he had powerful enemies he was not short of friends, supporters and backers including some press, a priest who defied the Church ban to be nearby, and a troop of cavalry dispatched to the area to protect “someone” if O’Connell lost.

Nor was there even the slightest contemplation of a murder or manslaughter charge afterwards. His opponent John D’Esterre, a Limerick Protestant and member of Dublin Corporation, was a crack shot, an ex-Marine Lieutenant of unquestioned bravery and yet from ten paces he not alone missed but missed badly (his ball hit the ground some distance in front of O’Connell when he fired first). O’Connell then aimed low and connected close to a very sore place.

D’Esterre was a man whose luck seemed to have run out. He was facing a disastrous bankruptcy, his marriage was on the rocks if not already over. His wife was pregnant with his second child. He may also have been a victim of circumstances. While it was he who took exception to O’Connell’s remark of “beggarly” on January 24th in relation to Dublin Corporation (in retaliation for its earlier anti-Catholic resolution) and sent his challenge to a man who could not refuse as his personal courage was being publicly questioned of late years.

There were enemies of O’Connell who seemed to have more than a vested interest in him getting his comeuppance. D’Esterre may have been manipulated but he did of course push it to the limit and didn’t give O’Connell any “get out” option at any stage. He was one of only two people it seems, on the Dublin Corporation who objected to the original anti-Catholic resolution which drew forth O’Connell’s lethal verbal “insult”.

He did take three days to write to O’Connell looking for an explanation but thus set in train events that could not be diverted as there was too much at stake.

Why was Bishopscourt or that part of it chosen? Obviously it was within range of Dublin but remote and the farthest point of that estate. It was given as from 11 to 13 miles from Dublin. It would seem to have been very secluded – it still has the remnants of being very wooded.

However, as already stated, a troop of cavalry (both Huzzars, I think) was dispatched so the authorities obviously knew as well -as most of Dublin. The cavalry actually arrived late and had met and unwittingly enquired of the result from the victorious carriage of O’Connell as it sped back to Dublin. 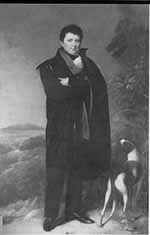 The appointed time was 3.30 p.m. O’Connell arrived at three and seemed to be most calm and collected, but fell on his backside as he crossed a ditch onto the “pitch”. Undeterred he, and more so his seconds, prepared professionally. D’Esterre arrived at 4pm. It took 40 minutes or so to decide the means, etc. i.e., a case of pistols each, ten paces apart, to fire according to his judgement at the drop of a handkerchief Their last exchange of words meant there was going to be no back-down.

D’Esterre then very honourably stated that he had no animosity towards Catholics whatsoever. At the signal he (literally) moved and shot first but missed very badly, if not inexplicably. Almost instantly O’Connell (who seems to have been no mean shot) fired the fatal ball.

It may neither have been his first duel and within six months he was heading towards a similar confrontation with none other than Sir Robert Peel (Chief Secretary). He was arrested twice – firstly at the instigation of his wife, the second time in Dover, it was to take place in Ostend.

O’Connell did not think he had fatally wounded his opponent and both surgeons did their duty. (O’Connell had requested this beforehand if it happened as such).

D’Esterre however was to bleed to death within two days. O’Connell was genuinely perturbed at his death, but obviously didn’t give up thoughts of duelling. He set up a pension for his dead opponent’s daughter and later went to great efforts to conduct legal business for the widow.

Before he died D’Esterre claimed he had not been in consultation with anyone on his pre-duel correspondence with O’Connell. However the Dublin Evening Post of February 7th stated “the subject (the duel) is pregnant with important reflections and must not be dropped“.

The widow D’Esterre eventually left for England where she married a brother of Arthur Guinness II and her daughter married his son by a previous marriage.