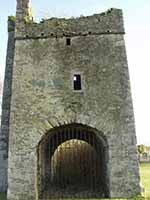 The gate of the medieval settlement of Lyons

Our community has been richly endowed with old churches and tower houses, each with a great story to tell.

Each church and castle gives us a different insight into the history of our community, perched between the mountains and the rich plainlands of the Liffey basin.

Why so many? Perhaps because in Ardclough we have always seemed to find itself on the frontier – just drive the roads in advance of a football match between Dublin and Kildare and you will know what I mean. 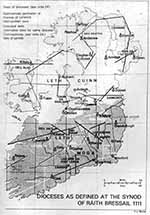 The very room in which I stand was on the border between Dublin and Kildare diocese, and when they came to build the new church in Ardclough in 1985 they found it was in Dublin diocese, although the next field was in Kildare diocese. A deft transfer had to be arranged.

There were no accurate maps until the 1830s, so Ardclough’s position was often in the line of dispute on the borders between parishes, between baronies and dioceses.

The diocesan borders of Ireland were delineated in two great synods at Raith Bressail in 1111, which worked more on spheres of influence than accurate maps, and Melifont in 1152 which tried to draw boundaries. 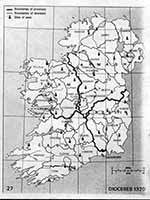 The county border line which can be crossed at Pluckstown for anyone planning a quick raid on the Dubs beyond.

The castles, and indeed the churches, needed strong walls, as raids were not uncommon.

The O’Tooles came down from the mountains and burned Lyons in 1332.

Oughterard was paying a black rent, effectively protection money, to the Hugh McShane O’Byrne and the O’Tooles in 1574.

Apart from the raids of the dispossessed, those in possession of the area were often engaged in disputes of their own.

Tower houses are one of the great Irish architectural curiosities and we have a rich endowment of these, five castles and a few more in the townlands beyond.

You can tell how closely associated the towerhouse is with the Norman conquest by the names borne by many of these castles, and the way that our Castles became a feature of our townland names.

In 1599 Lyons, Whitechurch and Barberstown featured in one of the first maps of the hinterland of Dublin.

A few fields north of Whitechurch is one of the curiosities of our community.

Puddlehall is one of the few moated houses found outside North Wales, according to long time Celbridge resident and UCD architectural professor Sean O Riordáin. He is buried in Donaghcumper graveyard.

Lyons is associated with three families throughout its history, Tyrrell in the 1200s, the Aylmer family who had a remarkable innings of 525 years after the estate passed to the family by marriage in 1271, and Lawless who took over the estate in 1796 and rebuilt the house to which the Aylmers had moved their seat as the Lyons house awe know today.

Family names, the families long gone, are preserved in the names of many of our castles. Reeves was the exception. No Reeves lived there.

Did the name come from the French term for the river?

The shapes and structures of the castles today have changed little from around 1400 although you can find war damage on many.

The three-sided wars of the 1640s were the most destructive in the history of our community.

Each and every one of our castles was burned, many were destroyed completely, as three separate waves of invading armies swept over us.

The war visited in three waves. 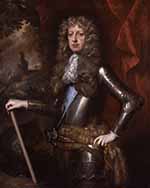 The burnings may have been partly inspired by personal vendetta. The man who ordered them, oddly enough, used to be a Member of Parliament for Newcastle borough.

Tiny Newcastle was accorded two members in the Irish House of Commons in 1612, part of a reorganisation by James I intended to pack the parliament with his own supporters, one of the places was given  to William Parsons, a Machiavellian figure whose entire career seems to have been characterized by betrayal and intrigue.

By 1640 Parsons had managed to inveigle himself into the heart of the great game being played out by Dublin Castle while the English king and parliament were squaring up to each other in London.

His pet project at the time was the proposed plantation of Wicklow, an operation which would conveniently leave 18,000 acres of the best land in the county in his own personal possession.

William Parsons’ immediate task through much of 1640 was to break up an alliance that had formed between Catholics and protestants in the Irish parliament.

Parsons did it with a series of sectarian measures directed at the Catholics and disingenuous messages to England warning about the Catholic threat.

Thus he helped provoke the rebellion of 1641 while at the same time formed the basis for the puritan reaction against Ireland that culminated in Cromwell’s invasion.

Parsons was not alone in suspecting that if Kildare rebelled, he would have something much more valuable that the O’Byrne estates in Wicklow to play with.

In February 1642 he was effective governor of Ireland, due to the infirmity of the second of the two newly Lord Justices appointed to run the country while the Lord Lieutenant was awaiting execution in the Tower of London.

Parsons instructed James Butler to ravage the castles in Kildare that were owned by people he had squabbled with in his days as an MP for the area, families such as Aylmer, Sutton, Eustace, Gaynor, Wogan and others that were rivals and opponents in parliament and at court.

The second wave of invasion came through on the other side of the Liffey.

While Butler was burning Ardclough in February 1642, General George Monck landed from England with his regiment, the predecessor of what are now known as the Coldstream Guards, and marched through Straffan and Barberstown before carrying out the infamous massacre of Rathcoffey in June 1642.

One of the fields near Ardrass is still named the horse field as the place where Monck’s cavalry camped.

Monck was fighting for the king on this expedition, he later changed sides and fought for Cromwell.

It is so-called because it is as slow a march as can be imagined, played that way because Monck was reluctant to march his soldiers into battle against his former colleagues on the Royal side of England’s civil war.

Parsons and Butler also switched sides before the three-sided war was over. 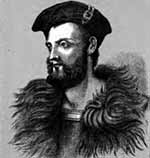 The third wave of invasion over the district came in June 1647 when Eoghan Rua Ó Néill and Thomas Preston pitched a joint camp in Celbridge, preparing for an attack on Dublin which never took place.

Although there was no fighting, there were a lot of casualties as the real killer of the battlefields of the era, typhoid, devastated their camp.

The valuation rolls from the following decades give us some hint of the devastation that occurred.

The value of the Tipperstown castles were  reduced from £120 to £40. 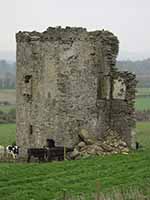 The castle behind Dunne’s in Oughterard, owned by Richard Allen, was  reduced from £20 to £10

The 1659 Census reports just nine people resident in Lyons,, still owned by George Aylmer of Hartwell  who was “returned a protestant by the Jury but known to have continued with the rebels in the first years of the rebellion and to have gone to mass with them he died a papist and bred his children all papists.”

The canon ball marks from Monck’s campaign can still be seen on the ]walls of the Sutton castle at Barberstown, which was in the front line of Monck’s march into the north of the county on behalf of Cromwell.

Castledillon bucked the trend, it was listed as having increased value from £60 to £50 in 1659, ‘being since repaired by Mrs Bowells.’

Some of the castles burned were never repaired.

But one of those that was has been lost since.

The base, all that remains of Castledillon castle

Finally, a sad story. This is Castledillon Castle, of which only a couple of stones remain.

It was associated with the De Hereford and Rochfort families.

Then, since the early 1800s local people removed the stones. It has not suffered the indignity of Richardstown near Straffan,

Nothing is left of a castle that existed when the Ordnance Survey maps were first drawn up in the 1830s.

The surveyor Thomas O’Conor wrote in 1837: “ there is an old Castle in the north part of Richardstown townland, which is, according to the Namebook, A square building about 60 feet in height’.

The base of Richardstown Castle, after being moved and dumped.

The base of Richardstown castle has been removed in the past decade by JCB and dumped in wasteland.

Both Castledillon and Richardstown serve as a reminder, this Heritage Week, of how vigilant we must be in preserving our built heritage

If we see, in this day and age, that our churches and castles are in danger, the enormity of our task in saving al the other aspects of our culture becomes clearer to everyone.